One scoop at a time - Sayra & Brianna

Blogger's note: This post is part of our new series, "Making the World Better One Scoop at a Time" where we highlight all the awesome things our people are doing to make our community, and the world, a better place.

We're kicking things off with Sayra (L) and Brianna (R), who are both dreaming of & working towards a future of helping people through medicine.

Q&A with Sayra - scooper at Molly Moon's U Village

mm's: So you went to Ghana to help deliver babies ... what was that all about?
Sayra: I went to Ghana on my own, with pretty much just a backpack ... I ended up volunteering at three different maternity clinics while I was there. On the first day, they handed me a butcher's apron and rain boots. It all happened very quickly. While the midwife positioned me in place and got me ready to pull the baby out, she began whipping (literally, beating) the mother with a stick because the mother, who was only 19, refused to push. It was so surreal, and something that would NEVER happen here in the states. I was in shock, and it all happened so fast, I didn’t really have time to react, but it just goes to show, they do things a little differently there.
mm's: Did your time in Africa impact what you wanted to study, or do with your life in general?

Sayra: Absolutely, 100 percent. The reason I didn’t run off to college right out of high school was mainly because I had literally no idea what I wanted to do with my life. Before going to Ghana, I worked in a hospital in Spokane for a year and a half and came to the realization I wanted to do something within the medical field, but I also realized I didn’t necessarily want to practice medicine here in the states. That’s where Ghana came in to play. I discovered that I could practice medicine in other countries that were less fortunate that the U.S.. Ever since I was a little girl, I’ve always had a deep love for Africa, so Ghana was just the first step in fulfilling my life goal.

mm's: Can you tell me a little bit about the rowing?
Sayra: I had never rowed before coming to UW. Previously, I was a soccer player, XC/track runner, rock climber, and yogi. A few days before school started, I was wandering around down by the boathouse and a coach asked me if I’d want to come for tryouts, so I gave it a shot. I didn’t actually realize it was an NCAA sport until about a month into practices. It’s important to me because it makes me part of a team, and a team that’s really amazing. The amount of history that comes with the UW Crew Team is actually incredible, and it feels really good to be a part of something so special to so many people. I’m a super competitive person, so that’s why I like the level of intensity that comes with the sport, and I love being part of a team; the group of girls I’ve become friends with are just… amazing beyond words. I think it’s made me develop a pretty thick skin, which will come in handy in the future, I’m sure.

mm's: What are your hopes/dreams for the future?
Sayra: I plan to go on to medical school, and I have a strong interest in becoming an OB/GYN. Post med school, I’d love to participate in Doctors Without Boarders, or something similar. Ultimately, I want to be able to have my own practice here in the states where I have the freedom to take extended trips to struggling countries and practice medicine there. The reason I chose my major was so that I could learn about how medicine works and varies from culture to culture, but also learn the basics of medicine and get my foot in the door for med school. This sounds so cliche, but I really just want to help people. I don’t really care how, or where, but I just want to make a difference somehow, and I want to keep learning every step of the way.

mm's: What made you want to become a physician's assistant?
Brianna: My mom is a nurse and my siblings and I grew up visiting her in the hospital while she was at work, playing in the halls and I think that's where my interest in medicine first began. I want to be a PA because you get to do pretty much everything a MD while also having a great work-life balance.

mm's: Where are you at with your studies?
Brianna: I recently got my BA and right now I am in a phlebotomy program in order to get some direct patient care experience. Notice I said I have a BA degree, not BS; in the fall I will begin taking all of my science prerequisites for PA programs.

mm's: What are your hopes and dreams for your future?
Brianna: My biggest dream is to impact as many people for the better as possible while I am on this earth.


mm's: Thanks Sayra & Brianna! We're so happy to have you as part of our team!
posted by Anonymous

i'm so proud of both these women & feeling lucky to have them on the moon crew. thank you sayra & brianna!

welcome to molly moon's homemade blog! after almost six years in business, i'm hoping to start using our blog to shine a light on all the ways we work to accomplish our mission: to make the world a better place, one scoop at a time! from the ingredients we choose to the amazing community of people behind our company, i hope our customers share our values and priorities and can engage with us here about how to keep the good stuff happening! please let me know how we're doing and drop us a line anytime! cheers! -molly

make your favorite flavors at home with our book! 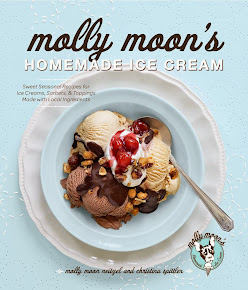 our favorite ingredients come from...

please read my post about our ingredients and our commitment to local & organics HERE.